That was pretty exciting. A free, big, enlightening event about the “Google Stuff”… Ok, ok. Who spoke with me here knows that it was NOT so enlightening: most of the knowledge they brought from USA is and was already available on the web. But that’s probably not the point. The point is, I believe, to share. Share the culture, the vision and… the APIs.

I went there for mainly two topics: Android and AppEngine. About Android, the presenter, Mike Jennings, was very funny (and you will see him as the second presenter in the video below) and a “great character”. But his knowledge of the Platform was pretty basic. I believe he sort of Project Manager or something like that. Plus, in the second part they invited to do a “technical talk about the SDK” a guy, Carl-Gustaf Harroch. He is developing an application that involves a bit of LBS (Location Based Services) and some Google Maps. Ok nice, but he straggled quite soon with our questions about… almost everything of the SDK. And, yes, I was quite bastard with my own questions. Come one: how can you do a talk like that without even knowing “enough” what is the meaning of the Tags within the AndroidManifest.xml? He was even quite young and not very confident, and he was unable to introduce the basic concepts before talking about more complex and in deep stuff. At the end, quite disappointing session, I must say. Probably, I knew more about it :-P . 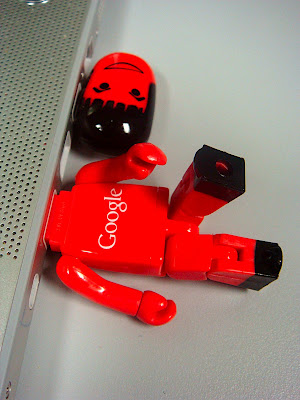 About AppEngine, I went to a “CodeLab”: a session where you are supposed to code. And I did, focusing more on my own Python code. They were available for help and questions, either about the application they proposed to build, or about your own. “In chair”, Mano Marks: confident. Probably too confident. But, at the end, he was helpful, even if an answer or two where quite “upsetting” (I mean: if I ask a question about something you don’t know, and I tell you that you are wrong, don’t be arrogant and confident; wait and see my proof!!!).

Liz Ericson (Product Marketing Manager - Developer Programmes) even announced the launch of the new Google UK Developer Blog. And she also sorted out like around 5 surveys (!!!) during the sessions (and a 6th just arrived in my inbox -_-) because “Google is a Data-Driven Company”.

More stuff? There is a playlist on Youtube about this Developer Day that will be updated with all the presentations/sessions. And an a couple of Picasa Web Albums. You will find me in some pictures (a crazy-doll for who finds me) and… I will be 100% in the Android Sessions breaking the balls of Mike: stay tuned on that! ;)

A complaint? I think they underestimate the IT business here in London. I felt like they didn’t send the best of them because “didn’t need to”. And we overtaken them!!!