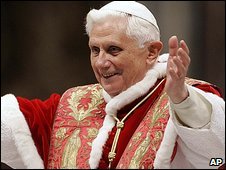 Once, in a very weird and dark nightmare, I read this letter from the Pope:

My dear Christians, The World is changing and a wave of new corrupted culture is establishing a new, different, atheist moral. Please, don't join the World in it's changing. Bear in mind that homosexuality is a Sin and an Abomination: I'm sure God is furious much more because of you loving your homosexual partner, than of the fact that you all are polluting the planet. So, please, stop bumping each other. Actually, I think would be way better if you were just raping your own sister! Being in this period of the year, bear in mind to destroy the Pagan beliefs of your kids: Santa Claus doesn't exists. Only Jesus, with it's collection of miracles, and it's conception on the 8th of December and birth on the 25th of the same month, it's real. Like Adam and Eva. Sincerely, your Pope

Ehm… I know: I have very realistic nightmares O_o !!! But, in the real world, things are pretty different: the Pope praised the Galileo’s Astronomy… after just 375 years!!!

PS Ah, of course: Merry Christmas to you all!!!