Here we are, trying to think of a title for this post. A post about what the HELL happened to us in our first attempt to go home for Christmas 2010. The only thing we thought about is “The Shortest Christmas Holiday”. You will have to live with that! :)

The weather was (still) great, even though we started to hear about heavy snow shutting down Heathrow, Gatwick, Luton… but we were hoping to make it before the snow would reach Stansted. What a bunch of fools. :(

We queue to do baggage drop… 3 times! First 2 times we were pushed back because “the flight to Naples was still close - we needed to queue 2 hours before the flight”. Yes, we are really looking forward to meet our relatives :) .

Security Lady: Do you have a Can?
My Ale: What?
Security Lady: There is something in the bag that looks like liquid!
My Ale: ehm... I don't know!
Security Lady: Let's look together.
My Ale: OK (Shit! She is messing up all my packing!)

After 10, very annoying, minutes they found the orange candle, and everything was fine. I hope whoever gets that candle will appreciate the effort!

We reached the Gate 19, hoping that would be the last sprint before sitting in the airplane and relax until landed in Naples. But we found this: 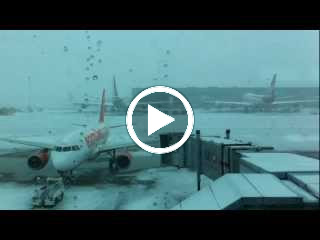 Click on the image to see the (sad) video!

Once we saw this, our expectation went downfall. Announcement after announcement, we knew our flight would be cancelled as well. And indeed…

A voice from EasyJet staff asked every passenger to reach Gate 3:

... a bus will escort You to the Main Terminal, where You will be able to collect your checked-in luggage...

Result? A mess of more than 600 people packed at the given gate. Where they kindly alerted us that “the bus could only carry 60 people at a time”.

Yes, WTF!?!? Why the hell you make so many people rush somewhere, if you know you can process only a bunch of them at a time?

Once we reached the main terminal, the security staff made us go through a maze (yes, a maze!) of side-corridors and back-doors, to reach the luggage claim area. It felt very safe… not!

And there we found “The Doors of Hell”. The only thing was missing was a Black-On-Yellow sign with written:

Our luggage was there, in the middle of a mess, with people looking for their, but also trying to figure out what to do.

We didn’t know that was just the BEGINNING.

We went out of the Nothing to Declare area, and found queues of all sort. People queueing for informations at help desks, others queueing for money, others queueing to buy some form of transportation to reach their destination, others trying to grab a sit at one of the 3 internet-points to reschedule or buy new flights.

We initially tried to talk to EasyJet, but a nice yelling cow said:

There is no reason to queue. Go on internet and book another flight, or ask for refund!

That’s what we tried to do. We queued at the internet point, while freezing (they are located next to one of the entrances), waiting for a sit, trying to preserve a civilised behaviour.

Once was our turn, and the usual italian jumped at the desk, taking our place, I started yelling and complaining, so he gave up. Ale says I actually went nuts, and almost “eat is head off”. Maybe. We will never know the truth.

No, Internet didn’t help. No EasyJet flights to Naples from that point on. Everything was already booked.

So we decided to go back home, taking the train, given that roads were all jammed. Ale suggested to “buy the ticket online, now that we had the computer”. I didn’t listen. And that was BAAAAAAAD!

We reached the Stansted Airport Train Station, to find… more queues! The stations was freezing, and people were queueing at machines and ticket offices, all trying to grab any form of ticket to go back to London.

We had our panic moments, with people screaming “There are no trains anymore!”. At that point, I ran at the platforms to speak with the staff. They explained that, because of the amount of people, they decided to block the entrance and allow only few at the time, to avoid people being accidentally pushed down from the platforms. Made sense.

I went back, bought 2 tickets, and queued in front of the entrance to the platforms… for 1.5h! Ale started to give signs of impatience, starting to yell at people that tried to pass in front of her. I loved that! :D

In the meantime, for 1.5h, a leak from the very high ceiling was dropping on me and my biggest luggage: at the end I was covered with a mix of salt/dust, water and I don’t know what else. But I didn’t really care. And couldn’t really move. And here is why.

We formed a human pack (again!), waiting for trains to reach the platforms, with information boards being continuously updated with delays. Our feet were killing us (frozen and in pain), and there was no room to move (unless you were willing to give up your place in the queue/pack).

Eventually we were allowed to procede to the platforms, were pushing and pulling I positioned us as close as possible to the point were the next train would open doors.

When the train arrived, was every man/woman/kid for him/herself: I pushed our 20kg luggage inside, used my size to pull in Ale and her luggage, and than grabbed 2 sits.

We got in London! Far, very far from Chiswick, but yet, in our City.

We started checking the Tube status info, finding that practically every line had some sort of disruption: heavy weather, signal failures (my favourite!), security alert (seriously? today?), cat under a train, and so forth…

But somehow luck helped, and the Hammersmith and City line brought us to Hammersmith. Tired, but there.

Once in Hammersmith, a new challenge: Ale had to pee! She started to run inside the Hammersmith Station, trying to find the Toilet (worth 50p!). I stopped at The West Cornwall Pasty Company: a small treat was mandatory!

45 minutes later, a District Line train arrived, and brought us to Thurnham Green Station. A bus brought us home, back where the whole trip started!

Ale’s sister managed to book us a new flight. To Rome this time: nothing available to Naples, but that’s ok. We will try again this week: let’s just hope we have better luck.

Otherwise, everyone is invited to our Christmas Dinner on the 24th!

And in case you want to see how much snow we had, check this out!

Yes, if you are in North America or North Europe, this amount of snow looks like a joke. But apparently UK is not prepared at all to handle this kind of weather.

Dear Mr PM: maybe is time to do something about this? Not just take money from Students, increase Taxes and VAT!