I’m impressed. Today a lot of important things just happened, and I think it’s work putting them down.

After what he said yesterday night, I was not expecting this to happen so soon. Mubarak stepped down! In addition of being a great news for all my friends that are directly or indirectly related to Egypt, this is an INCREDIBLE news for something I tagged as “lost”: hope.

If the people of Egypt, united and determined, managed to overthrown Mubarak’s regime in the name of Freedom, Fairness and Democracy. This means that on planet heart hope has still a place. Well done my friends: I’m so happy for all of you!

As some of you might already know, I’m used to track my working days, with a physical log that comes with me in meetings and it’s always next to me during the working hours.

Today, as I started nothing down the todo and done, I started the usual header with:

Also, a number of things is happening in my team: we are finalising the release of a lot of new pages on the Betfair website, that will go live soon. I don’t know if I should say WHAT we are going to release, but I worked on a couple of those, on a pretty tight and schedule, and so it’s great to finally see this stuff released. That’s the kind of “satisfaction” I was looking for, and that in Betfair I’m definitely getting. Finally!

Yes, that’s what I believe. What just happened is that Micro$oft made Stephen Elop being hired by Nokia with a plan. Make him their “Trojan Horse”: go in, fire key people that would get in the way, and make Nokia a dependant, an asset for Microsoft.

I’m really sad about Qt: WinMob phones will not support it!!! This is so retarded, that proves my theory. All the ex-Trolltech fella, as well as all the Open Source community around Maemo/MeeGo, they were all let down by this deal.

1 year ago circa, when Nokia was pushing Maemo first, and MeeGo second, I was saying few things:

Nokia doesn't know how to be Open Source! They still need to prove that they can do it! The Open Source nature of Maemo, and MeeGo, are being used to steer really _committed open source advocates_ into a main Company-Driven, Far-From-Open-Source interest! Be aware that this can all fall apart soon!

But, again, people don’t like to listen. It’s easy to jump in and associate yourself with the “underdog brand” (yes, Nokia was (and is) an underdog compared to Apple, and now it’s even more).

What are developers going to do? Are the developers going to jump on yet another, different Nokia wagon? This will make Apple (and Google) look even more attractive: yes, of course, they are respectively a close and a semi-close environment… but they are reliable in terms of small and large business. They laid out a strategy and a target, and in the last 2/3 years they sticked with it! Quite important if you want to make a living out of Mobile Development.

And, again, Qt… that beautiful, brilliant, smart, well designed, well documented, evolving framework. What is Nokia going to do with that? I hope someone finds a way to recreate Trolltech and go back to what they were doing before the Nokia-Shit-Storm started. 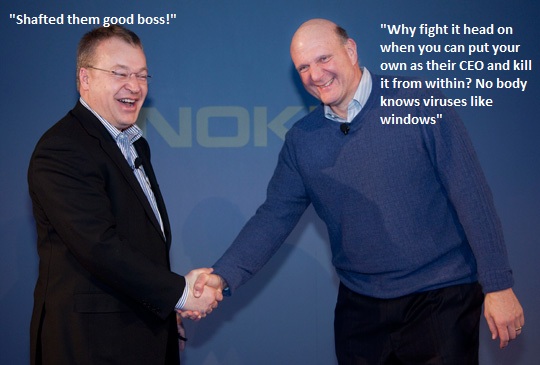 Our (Nokia) Hardware, Their (Microsoft) Software.

They are going to take Nokia, dismember it, toss all the work done by committed and skilled engineers in the toilet, and impose the Micro$oft crap.

But if you think I’m too “extreme” in my judgement, read this mild article from BBC News.

Today I started my application for an HSBC 90% LTV Mortgage. So I went to the branch for my booked appointment, started the interview, and all was going great.

At certain point though, we hit a “creepy” moment:

Do you have any plan in place to pay your mortgage if you die? Who is going to repay the mortgage if you get suddenly ill and decease? And what happens if you loose your Job?

I’m sure my face turned red and weird. Too creepy to think about this in the very moment in which all my extra-work activity is focused on laying down the fundaments for a house and a family.

Yes, I know, I need to think of all the eventuality, but… I was not ready to answer that.

Anyway, I’m pretty sure I’m going to sign for an Insurance Policy to pay off the Mortgage in case I die. Just in case, you know…