Puff, Pant! THAT was not easy! But finally, “normality” seems not too far away.

Many things have happened in the recent months: we got married; I helped my lovely wife with the pregnancy (well, she did all the hard work); and, on the 7th of November, we have became parents of this beauty: 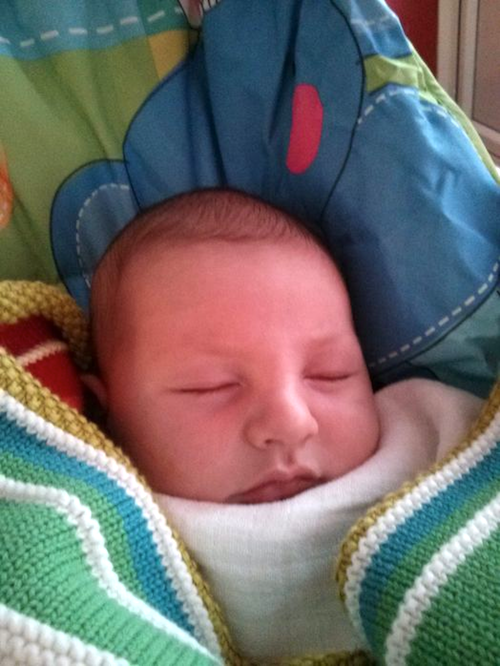 Now, we have to slowly learn to live our new life together: while we learn how to be parents, Leonardo will be learning how to be a baby. What now looks like a difficult, consuming and intense task (ask me how much we sleep at night!), will at some point become “daily routine”. A sweeter routine with Leo at the center of it all!

It is a full RESET to which we need to SETTLE. A RESETTLE.

A new life, with many unknowns to uncover, but also the will and need to be as united and as strong - actually, even more. But love seems to be our great strength, and Alessandra and I are quite good at teamwork.

Night sleep: a memory of the past

Well, as EVERYONE warned us, sleeping with a newborn baby is like trying to play retro videogames: you ALWAYS want to do, but never manage to.

Leonardo is a very unstable sleeper so far, and he seems to like to be more active during the night: maybe a good skill if he decides to join me in the craft of programming, but for now it’s just an energy drain (for us!). A drain that transforms into a sweet smile once you see his eyes looking at you. You are tired, you are exhausted but, somehow, his puffy cheeks make everything perfect.

One thing that seems to work is carrying him around, while I rock him and tell him all sort of stuff, just from the top of my head. I think I have already talked him into becoming a software developer: he hasn’t disagreed, so I assume he is OK with it :-P .

This is close to 0 for now. Either as a couple, or on our own, time to do stuff by yourself seems a very hard thing to achieve. But I’m sure it will get better: myself I’m still a night-worker, so with his sleeping becoming more regular, working a bit on opensource or playing videogames will be eventually possible.

Talking of having no time to do stuff, while it seemed quite impossible, I have indeed managed to complete the blog migration! It took a while to do the different bits, and I still have stuff to work on, but I’m now serving this from GitHub Pages using Jekyll to generate the static HTML/CSS/JS. Much happier: I can move to any other hosting in a matter of hours. I don’t even know why I was bothering to use non-static content for blogging/personal site.

If interested, the repository with all the source code (posts + Jekyll plugins) can be found at my detro/detro.github.io “source” branch.

Migrating the blog means also producing more content, right? Well, this is a first attempt. Not a great one, I admit - I find quite difficult to come up with things to say, when my brain it’s affected by sleep deprivation. But I have a TODO list on my whiteboard of things I want to talk about:

Catching up on personal projects

I have been quite far from Selenium, GhostDriver and PhantomJS. Partially is my fault (I did spend some time playing GTA V before Leonardo was here), but mostly is because of all the above.

While I don’t really have a fully up-to-date picture of what’s happening with PhantomJS, I know that Vitallium is working on the porting to Qt5. That is a very exciting perspective, and the project looks like it has a brilliant future ahead.

Also, the Qt-Project is moving Chromium/Blink: this means that PhantomJS architecture will have to change sensibly, the core will be based on a more commercial browser and, most importantly, I believe a full API compatibility break would be a given. Why is that good? Because we could apply all we learned from developing PhantomJS so far, and do a better job in many areas.

GhostDriver has received some love (aka Pull Requests). I have worked to integrate them into an upcoming 1.1.0, but I think there are other more pressing improvements to do, before considering a release.

And, if you really want to, you can still check out the master branch and run it inside latest PhantomJS. So, I don’t feel too much pressure to package a full release.

That’s all for now.